So it may come as a surprise to learn that the Florida Roofing and Sheetmetal Contractors Association has been working hard to revise Florida’s building code, which now requires that most roofs be fully replaced when just 25% or more is damaged. Insurance industry experts have called the replacement requirement, believed to be unique to Florida, one of the main factors driving losses in the state – and something that has encouraged fraudulent claims and “free roof” offers that have become commonplace in some cities.

“It’s a great idea. Removing the 25% requirement would give so much more flexibility,” said Michael Carlson, president of the Personal Insurance Federation of Florida. “We love the idea.”

The roof-code revisions, if enacted next year, would be one of several recent regulatory changes that may give insurers some of the relief they had asked for in the 2022 Florida legislative session, which ended March 11 without significant reform measures. Here’s a look at the winds of change:

Florida’s building code has long been considered a notch tougher than many other states’ codes, needed because of Florida’s vulnerability to hurricane winds. Mandating full replacement for some types of roof materials was seen as a way to preserve the integrity of a roof system and to help prevent failure in subsequent storms.

But in recent years, some major roofing contractors have begun to lobby for changes.

“Most of our guys want to install quality roof systems that will last for years and years, and this requirement takes away from that,” said Mike Silvers, a roofing contractor and director of technical services for the roofers’ association.

When homeowners and some roofers believe that a roof will be fully replaced every few years, often at no cost to the consumer, there’s little incentive to invest in a modern system that can last 30 to 40 years, Silvers said.

A member of the Florida Building Commission’s technical advisory committee on roofs, Rob Whitcomb, a Clearwater architect, suggested that the insurance industry, faced with mounting losses and insolvencies in recent years, may have urged the roofing association to sponsor the changes. But Silvers said the impetus came from roofing contractors.

“It may seem contrary to our business, but people want to buy good roofs, and our guys want to install them,” he noted.

The Florida Building Commission reviews parts of the construction code every few years. For the 2023 edition, the Roofing and Sheetmetal Contractors Association has proposed a number of changes, including an exception to the 25% rule that would take into account the age of the roof material. Roofs younger than 9 years old would not have to be fully replaced in most cases.

The current code reads: “Not more that 25% of the total roof area or roof section of any existing building or structure shall be repaired, replaced or recovered in any 12-month period unless the entire existing roofing system or roof section is replaced to conform to requirements of this code.”

In its note to the Building Commission, explaining the rationale for the code change, the roofing contractors association noted that the existing rule does not take into account the longevity of most roof material. “This leads to many roofs being completely replaced with years of serviceable life remaining,” he wrote. “The cost to replace these … falls to the owner or most often their insurer.”

Other Code Revisions Could Have Impact

The association also has proposed tweaks that would allow some roofs with two layers of shingles to leave the first layer in place if it isn’t damaged. Current code language requires replacement, not just reroofing over existing shingles.

Other proposed changes would update South Florida’s roof codes to match the rest of the state.

Many Floridians may think of Miami-Dade County and Broward County code requirements as more stringent than those in the rest of the state. And on some construction techniques and materials they are. But on roof underlayments, the membrane between the roof decking and the shingles, the South Florida codes as currently written are not as tough, Silvers explained. Upgrading them could help reduce water damage, which have become a major driver of losses for insurers.

“That could really have a big impact for insurance companies,” Silvers said.

The proposed changes are far from certain. The process of revising the code requires two rounds of review by the roof advisory committee and two periods of public comment. The first comment period will close April 18.

If approved by the full Building Commission, the final changes would be part of the 2023 code, which is set to be published in December of next year, advisory committee members said.

Matching Law Also Plays Role, But Has Been Challenged

Florida’s building code is only part of the story on why so many roofs with seemingly minor damage get replaced. The state also has what’s called the “matching law.”

Section 626.9744, enacted in 2004, reads: “Unless otherwise provided by the policy, when a homeowner’s insurance policy provides for the adjustment and settlement of first-party losses based on repair or replacement cost, the following requirements apply: When a loss requires replacement of items and the replaced items do not match in quality, color, or size, the insurer shall make reasonable repairs or replacement of items in adjoining areas.”

The Florida Office of Insurance Regulation has for a number of years interpreted the law as a “floor” – if shingles used in repair can’t match the rest of a roof or roof section, then the entire roof should be replaced. The insurance policy can stipulate more-generous replacement provisos, but not less-generous, OIR has argued in correspondence and in court.

The key wording is the “unless otherwise provided by the policy,” attorneys for the Palm Beach Gardens-based carrier wrote in a 2021 lawsuit against OIR, filed in Leon County Circuit Court. The insurer asked the court to decide the meaning of the law and if its homeowner policies can place a limit on replacement costs.

“Olympus desired to set a specific maximum limit for matching because it has historically paid out large amounts in matching costs, particularly related to roof repairs and the costs paid to match roof tiles and shingles,” the complaint reads. “Absent a reasonable limitation on matching costs, Olympus will continue to face high matching costs that are not contemplated in the coverage offered or the rates charged, and which will impose a significant strain and burden on Olympus’ business.”

The insurer, with has more than 82,000 policyholders in the state, noted that three other court rulings, involving other Florida insurers, support the idea that a policy can place limits on matching costs. In a 2020 decision a Florida appeals court wrote: “The statute begins by stating, ‘unless otherwise provided in the policy.’ The court cannot ignore this language,” which means the policy is controlling.

Then things took a turn. The Olympus lawsuit was voluntarily dismissed last week by the insurer without explanation.

Olympus attorneys Karen Asher-Cohen and Laura Dennis could not be reached for comment. But sources familiar with the case said that Olympus may have agreed to drop the complaint so that OIR would proceed with a form filing. The form was approved April 1, and is marked “trade secret,” so the contents are not available on the OIR filing web page.

But insurance industry sources said it’s likely that OIR, facing mounting pressure from insurers after the Legislature failed to enact property insurance reforms this year, has agreed to approve the Olympus limits on roof matching. The matching sub-limit provision notes that the extent of repairs or replacement will be based on the cost of repair or replacing undamaged portions of the property; the degree of uniformity that can be achieved without such cost; and the remaining useful life of the undamaged portion.

Officials with other insurance companies called the approval a major change for OIR, and several insurers are expected to follow suit this year with their own matching limit filings.

Other Regulatory Changes Could Make a Difference

The approval and the proposed building code changes are the latest in a handful of actions that regulators have taken in recent weeks that could help fill the hole left by legislative inaction.

The OIR last month also allowed a policy endorsement by American Integrity Insurance, which will send most homeowners’ claims disputes to arbitration or mediation. The news caught some by surprise, and more carriers are now expected to craft similar endorsements.

The Office of Insurance Regulation last week also revealed that it will now allow insurers to offer policies with the option of roof deductibles. A Senate bill this year would have allowed insurers to require the deductibles for roofs, but the bill stalled in the House.

Insurance leaders said the regulatory change by OIR was welcome, and could help stem the tide of solicitations by some roofing companies. But it may not make a significant difference if many homeowners don’t opt-in.

“Higher roof deductibles could deter some solicited claims by making it harder to inflate the estimated repair costs to cover a larger deductible, but it won’t stop the solicitation itself nor the manipulation of claims costs by bad actors,” said John Rollins, a former Florida insurance executive.

Also last month, the Florida Department of Financial Services announced its investigation had led to the arrest of two roofing contractors who had reportedly offered “free roofs” and paid deductibles to homeowners in the Naples area.

“The theme is: We’re seeing a nibbling around the edges of the problem,” Rollins said.

6 Quick Cleaning Tips for Germiest Spots in Your Home

Wed Apr 6 , 2022
Looking for an easy way conquer those chores? Focusing on surprising hot spots ensures a healthier you and a spring-fresh home in minutes! Find out where the germiest spots in your home are, which places you should be cleaning on a daily basis, and how do so in a flash. […] 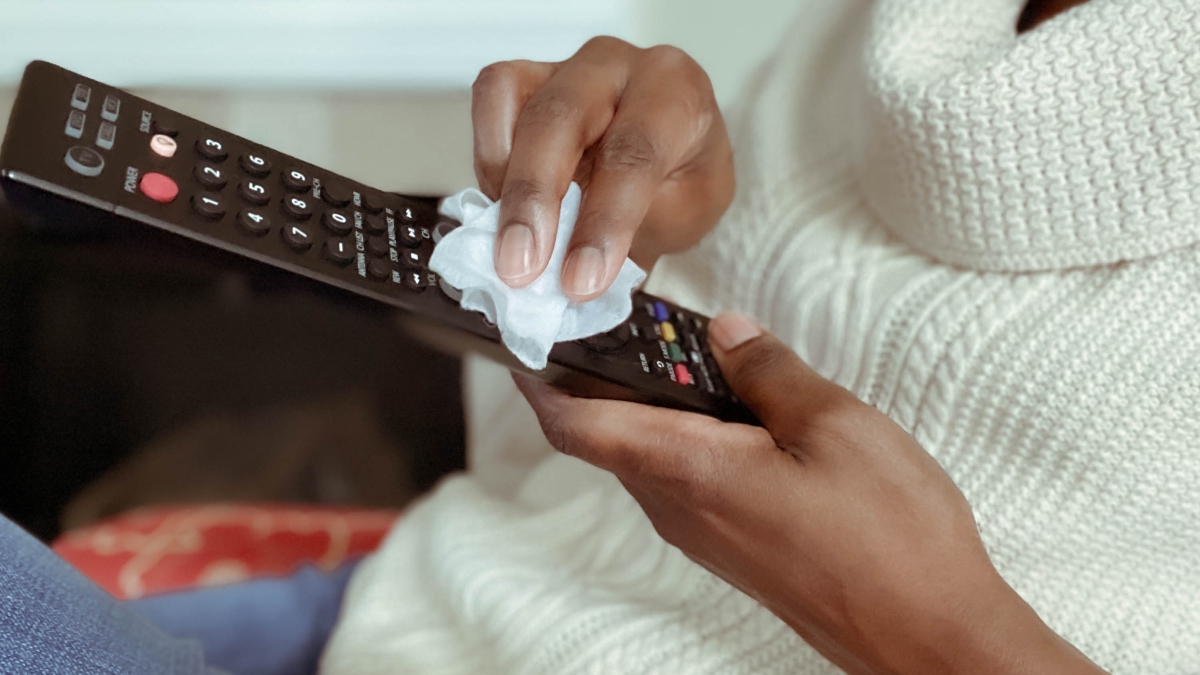