The Iowa Department of Natural Resources is evicting park rangers from government-owned houses in 23 state parks because it doesn’t want to pay up to $1 million on repairs.

Critics of the plan say if park rangers no longer live in the parks they patrol, park users — more than 16 million people in 2020 — will have to wait longer for help if there’s a boat crash, medical emergency, power outage or a crime.

Follow Up: Park rangers speak out about losing housing in Iowa state parks

“It’s a slippery slope when you start depending on other agencies to cover your bases,” said Dave Sunne, who was a ranger and lived in Backbone State Park, near Dundee, for 24 years. “What do you do when the electricity goes out in the middle of the night and there’s no heat in the cabins? You can’t call the sheriff’s department for that. It is disheartening.”

“It’s a slippery slope when you start depending on other agencies to cover your bases,” said Dave Sunne, who was a ranger and lived in Backbone State Park, near Dundee, for 24 years. (Jim Slosiarek/The Gazette)

There’s also the question of why the state does not want to invest in wildly popular state parks when there is a $1.24 billion general fund surplus, said Rep. Chuck Isenhart, D-Dubuque, who introduced House File 2255, which would allocate $20 million from the federal American Rescue Plan toward repairs and renovations of buildings in Iowa’s 71 state parks, forests and preserves. The bill, which sets aside $4 million of the total for ranger houses, was referred to the House Natural Resources Committee last week.

“We’ve been living off the sacrifices off previous generations for a while now and we haven’t been making investments in our infrastructure,” Isenhart said. “ Knowing we had these surplus resources, the right thing for the governor to do would be to say it’s OK to give me recommendations on ways to catch up.”

The Iowa DNR did an inventory of the 26 state park houses and determined it would cost $341,000 to get them up to code and another $556,000 for deferred maintenance, such as replacing windows, siding, roofs and heating and air conditioning systems. The agency estimates it would need another $100,000 a year for ongoing maintenance.

Some of the houses were constructed in the 1930s by the Civilian Conservation Corps, while others were there when the Iowa DNR acquired the parks.

The ranger’s house sits next to the park office at Lake Macbride State Park near Solon. (Savannah Blake/The Gazette)

Palisades-Kepler State Park, near Mount Vernon, has a house built in 1940 that needs $18,000 in repairs, the Iowa DNR reported.

A report the agency provided to The Gazette about its plan to ask park staff to move out of the parks says:

“There is no quantifiable customer service benefit from housing. DNR leadership engaged with staff throughout 2021 to reach this conclusion. Parks with and without housing are equivalently safe, supported, and maintained. Additionally, only one-third of Iowa’s state parks have housing. Maintenance is very expensive and competes with public amenities for funding. Therefore, DNR has decided to terminate housing.”

The Iowa DNR says the change will not impact safety in the parks because staff will continue to work their regular shifts and be available for emergency response.

“Whoever is on duty is the point of contact for an emergency, not whoever lives in the park or nearest to the park,” the report states.

But Sue Cave, executive director for the State Police Officers Council, the union that represents park rangers and conservation officers, among other law enforcement officers, said forcing rangers to move out will reduce services to park users.

“Their (rangers’) function there is to be able to provide quick access to emergency response for anything that happens in the park as well as having a deterrent effect of having your house there,” Cave said.

“Some of these parks are out in the middle of nowhere, so your only other option is calling 911,” Cave said. If the closest city is 30 minutes away, that may be where the park ranger lives or where the nearest sheriff’s deputy is working.

Some of the state’s most popular parks, such as Macbride, swell to the size of a small city on summer weekends.

Beachgoers sunbathe and swim June 2, 2020, at Lake Macbride Beach near Solon. (The Gazette)

There can be fights, domestic abuse, drunken driving or presumed drownings, Sunne said. Park rangers are trained law enforcement officers who use many of the same tools — including firearms and body cameras — as police officers and sheriff’s deputies.

Cave also is concerned some rangers may not be able to find affordable housing near their state park, forcing them to move even farther away.

The Iowa DNR first asked park staff to pay rent on the houses, but the union got a tax opinion that they were exempt, Cave said. Agency leaders then notified rangers and other staff they would have to move out. The Iowa DNR said free and mandatory housing for park staff no longer is the norm in state parks.

What about park rangers in neighboring states?

Wisconsin has housing in some state parks used by rangers and park managers, said Brian Hefty, Parks and Recreation deputy bureau director, said Monday. Its parks agency charges rent to staff who live in these houses, which is used to maintain the properties.

Minnesota has 26 staff houses in state parks, 16 of which are occupied at this time, said Jamie McBride, from the Minnesota DNR.

“Being on site makes staff available to better meet visitor needs, especially those involving emergencies,” McBride said in an email. Parks with live-in staff tend to be larger with high visitation or in remote areas. These site supervisors also may manage critical resources, such as a bison herd, McBride said.

In South Dakota, conservation officers, which include park rangers, are required to live within 10 miles of their duty station, said Nick Harrington, communications manager for South Dakota Game, Fish and Parks. Some live in state parks, others do not. The officer for Custer State Park, for example, lives in a privately owned house in the park.

Because there is a shortage of housing in much of South Dakota, the state helps pay for housing for some state park staff, especially at remote duty stations, he said.

New plants and landscaping products on the market - Salisbury Post

Sat Feb 12 , 2022
Nurserymen, landscapers, lawn care and landscape professionals converged in Greensboro last month for a week of horticultural education and displays of plant materials. The Green N Grown’ Show is a showcase for those in the landscape industry providing the opportunity to share their wares and ideas. It also gives the […] 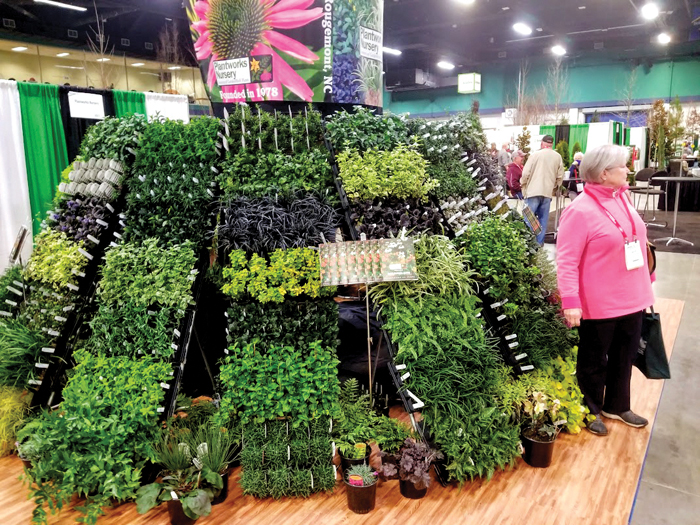