There were bullnose dressers, plastic swivel organizers, brass étagères, tessellated marble coffee tables, rough-hewn milking stools and Ducaroy‘s Togos, but they felt less significant, less substantial in the shadow of the most obscure object of our desire: the circular sofa. They did not do what we needed them to.

Perhaps, in a language better suited to portmanteau, there is a word for the compulsion to allay a sense of profound existential loneliness by updating one’s home decor, as many of us have during the pandemic. In English, we don’t have one, but there are other, more modern ways to “name” a phenomenon: with a profile picture, an emoji or a shoppable tag (even though this one’s all sold out).

The circular sofa. We love its rarity, its roundness and its emotional pull. The curved sectional paused our doomscroll since the early days of 2020. We watched and rewatched hypnotic reels of them being pulled apart and put back together. The best dealers knew that. “We went very strong on the circular sofa around August 2020,” founder and creative director of luxury vintage retailer Pop Up Home Tricia Benitez Beanum tells me over the phone. “We sold so many. People went crazy for them.”

Attempting to define this unique, curvilinear object is a tautological exercise. The circular couch is a couch, or pieces of a couch, with a boundary or circumference that forms a complete or partial circle. Easy enough to imagine, much more difficult to find. Like a sign twirler on La Brea, Google desperately attempts to redirect us toward more profitable alternatives. Did you mean Wayfair curved sofas? it asks. Have you seen this round swivel armchair on sale at Pottery Barn? No, thank you, we say, typing “1stDibs” directly into the search bar. We’re looking for something special, something specific.

I am one of us: I am in the market for a curved sofa. I recognize the platonic ideal: Milo Baughman’s 825 sectional, designed for Thayer Coggin in 1968. I know its price (around $16,000), and I know I must look elsewhere. I am, again, one of us, so I prefer not to buy new — too wasteful, too expensive (and wouldn’t get here until early February). So I scour Facebook Marketplace and OfferUp; I follow hundreds of vintage sellers on Instagram (@eastonhaus for marble, @sameoldla for ’70s Italian plastic, @monte.vision for the kind of delicious weird you can only find in the desert). So far, I’ve come up empty-handed.

I would like to say my search is born of necessity, because my living room is awkwardly shaped and a sofa with a circular profile would provide crucial partitioning. But we all know it’s more than that. A circular sofa, when done right, creates an atmosphere of its own, a self-enclosed bubble of good taste. The circular couch is, furthermore, a spatial flex (I only have room for a quarter circle, so I’m excusing myself from this accusation). Owning one implies that your living room is cavernous enough to accommodate a second, smaller living room within it. Unlike its ubiquitous U-shaped or L-shaped siblings, the circular sofa can’t be shoved against walls or tucked into corners: To properly show off its curves, we need substantial clearance on all sides. Blame Baughman, who believed furniture should be as aesthetically pleasing from the back as it is from the front. I do.

We need curves to take the edge off. Our brains interpret hard edges and sharp angles as threatening and dangerous, raising our neurological hackles. A square coffee table warns us to stay alert and afraid (and we are already so scared). On some level — cellular, psychological or biological — we are soothed by the soft curves of biomorphic shapes, squishy furniture and “blobjects.” In 2013, neuroscientists at the University of Toronto Scarborough partnered with European designers to show 200 people renderings of rooms: Half were full of rounded pillars and oval ottomans, the other half were decorated with boxy couches and coffee tables. “As predicted,” the study found, “participants were more likely to judge spaces as beautiful if they were curvilinear.” Neuroanatomically, curves activate the anterior cingulate cortex, “a region strongly responsive to the reward properties and emotional salience of objects.” It’s theorized that we love curves because they resemble shapes found in nature, like shells and mountains and our mothers. Whatever the reason, we don’t just love the way curves look — we love the way they make us feel.

The circular sofa is a place to gather, a spiritual descendent of that uniquely suburban, utopian symbol of togetherness: the conversation pit. The first architecturally significant conversation pit was the result of a 1952 collaboration between Finnish architect Eero Saarinen and American-born, Florence, Italy-raised interior designer Alexander Girard at the Miller House in Columbus, Ind. Tucked four steps below the rest of the living room, Miller House’s sunken square is lined with a perimeter of segmented couches swathed in bright red upholstery. As it swept through the ’60s, the conversation pit became a delineated social coliseum, designed for deep conversation and deliberate social intimacy, the interior design equivalent of the cul-de-sac.

We turned on our conversation pits just as quickly. It turns out they’re impractical for watching television and, like the cul-de-sac, surprisingly dangerous for children. In 1963, “Time” published “Design: Fall of the Pit,” an article that suggested unhappy homeowners cover their conversation pits with “a few cubic yards of concrete and a couple floorboards … no one will ever know what once lay beneath.” On the graves of our conversation pits, we laid down shag carpeting and sectional sofas, which allowed our television sets to serve as the focal point of our living rooms. We were trading that utopian “we feeling” for a “me feeling”; we once needed a community, now we needed only TV. The sectional sofa didn’t judge. Sitting alone in a conversation pit signified an absence; sitting alone on a sectional sofa, which could, theoretically, quickly convert back to conversational furniture, didn’t make us feel quite so lonely.

While the more compact L-shaped sectional immediately earned a permanent foothold in the catalog of mass-produced furniture, its less versatile circular sibling struggled to find purchase and nearly went extinct. Today, the relative obscurity of the round couch is a feature, not a bug. Anyone can buy a secondhand L-shaped sectional on Facebook Marketplace, but snagging a curved sofa involves more capital, effort and taste. The circular sofa is a status symbol that knows how to let its hair down. There’s nothing about a Kagan-esque serpentine sofa or Camaleonda that says, “Come, watch 10 episodes of ‘Chopped,’ no breaks.” But with the circular couch, that invitation is always open. It’s that perfect balance between comfort and cachet.

In the chaos of the last two-plus years, our circular sofas have been generous. We’re raw, vulnerable, newly reborn, and round couches make us feel safe, cocooned. Their modularity provides insulation against lingering agoraphobia or laziness: They reassure us our more social selves still exist. In the early pandemic, the circular sofa was a promise we made to ourselves: that one day our friends and family would gather at our place. We would tell them how much we missed them, how good they looked and how grateful we were for the sourdough they had brought. They would sit across from us (or next to us — the configurations are endless), our adopted terrier on their lap, lean in and say, “I love this couch, where did you get it?”

Liz Raiss is a writer, editor and furniture enthusiast based in Los Angeles. She runs the (formerly anonymous) Instagram account @design.out.of.reach.

Mon Oct 3 , 2022
If you have children or share a home with them, then you know that keeping your space clean can be a tedious, never-ending task. As difficult as it is to clean and keep your space neat with children constantly underfoot, it is not an impossible mission. Here are some tips […] 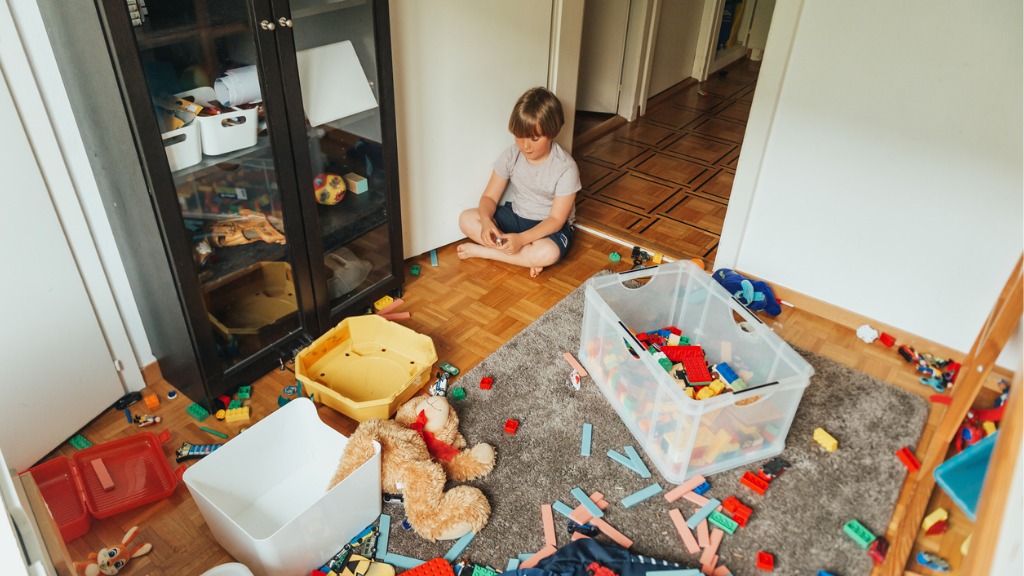