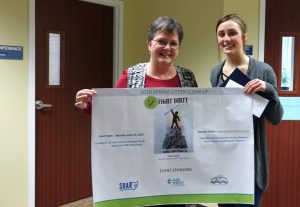 Leah was given a certificate of appreciation from the commissioners, acknowledging her achievement and contribution to local education efforts to promote litter prevention.  She was also awarded a $100 cash prize. CNE Principal T.J. Glassmeyer was there to accept the additional $100 cash prize awarded to the school’s art department.

Leah, who has a huge passion for art, thanked her mom, Annette Decatur, for urging her to enter the contest. Leah, who is hoping to be a physician’s assistant, said she wanted to get her neighborhood involved in the Spring Litter Clean-Up, which will be held April 21.

The T-shirt contest and Spring Litter Cleanup are sponsored locally by the Clermont County Convention & Visitors Bureau, the Duke Energy Foundation, and the Southern Ohio Association of Realtors (SOAR).

“We promise the weather will be better than today,” said Warren Walker, Government & Community Relations manager for Duke Energy. He mentioned that in 2017, more than 500 volunteers removed 400 tons of trash, including 10 miles along river banks and lakes. He said Duke was proud to be a sponsor of the event.

Greg Traynor, president of SOAR, said, “We have several realtors who participate in the event every year. After all, the majority of our realtors work and live in Clermont County, and it’s imperative that we have a clean and desirable place to live so our neighborhoods can grow and prosper.”

In addition to the grand prize, $25 cash prizes were awarded to students in each grade level, K-12.   The grade level winners and their designs can be viewed at the event website: http://www.springlittercleanup.com/t-shirt-design-contest.html/.

The 2018 Spring Litter Clean-Up will be held at 9 a.m.-noon on Saturday, April 21, at various locations across Clermont County and the East Fork Little Miami River Watershed.

Online registration for the event is open: http://www.springlittercleanup.com/.  For more information, contact the Clermont Soil & Water Conservation District at 513.732.7075 or the Valley View Foundation at 513.218.1098.

A 13-year-old Clermont Northeastern Middle School student is facing criminal charges after a gun is found in his locker.

A tip that the teen might have drugs prompted the Oct. 9 locker search which led to the discovery of the unloaded .22 caliber revolver in the student's backpack, according to the Clermont County Sheriff's Office.

The school resource officer took possession of the gun and contacted the sheriff's criminal investigative unit.

The student told detectives that he removed the gun from his father's room and put it in his backpack without his father's knowledge, according to police. He did not plan to use the gun nor did he have ammunition. He forgot the weapon was in his bag, police said.

The teen is charged with one count of illegal conveyance of a deadly weapon in a school safety zone, a fifth-degree felony. The student was transported to Clermont County Juvenile Detention.

No threats were made to anyone nor was the gun displayed, according to police.

The safety of the staff and students on the CNE campus is a priority for the sheriff's office, Sheriff Robert Leahy said.

"We will continue to encourage students to report any issue that jeopardizes the safety of students on the campus," he said.

Two weeks before their first competition, students participating in Clermont Northeastern High School’s newest extracurricular had no uniforms and were still waiting on their equipment. Their coaches were trying to determine their role.

The excitement and enthusiasm, though, was evident.

Robert Sick and Steve Williams are the faculty members in charge, and have spent much of the preseason getting acclimated and organized.

“We are learning every single day how to coach,” Sick said. He and Williams and five students are in what will be team’s home “arena” – a classroom in the north wing of the high school. The students are playing Smash Brothers, one of seven games sanctioned by eSports Ohio, which regulates the competitions. There were two monitors in the room this day; they were expecting 24 to be set up the next day. The district secured funding through CARES grants.

High School Principal T.J. Glassmeyer said he and Dean of Students T.J. Dorsey were working to provide more after-school activities for students who were not interested in sports. “We began looking at different options and stumbled across eSports, which is exploding in popularity,” Glassmeyer said. ‘There are a number of schools in the area that have competitive gaming teams and the rise of college gaming scholarships makes it even more appealing. Our superintendent, Mike Brandt, and treasurer, John Espy, were incredibly supportive and helped secure the funds to purchase the necessary equipment.”

Glassmeyer sent an email to faculty and staff asking for coaches, and Sick and Williams stepped forward. Both are video game players.

“I went to his room and said, ‘Hey, do you want to do this together?’ and we asked to split it, and somehow we dove into it not knowing a thing other than it was some sort of eSports,” Sick, a mathematics and special education teacher, said. “When that came out, I said to myself ‘This is pretty cool. How am I going to start this off? How am I going to get this going?’ He had the exact same thoughts and we’ve known each other for … how many years now, 16 years?”

Williams, who teaches science, envisions the two taking on more of a supervisory role as the season progresses. Schools can field three teams of up to six players each during competitions. Each team will have a captain. Sick said they hope to have 40 or more players, and all will get a chance to compete, whether as starters or “backups.”

That is a primary reason for forming the team, Glassmeyer said.

“We have already seen a number of students, who had not been involved in any after school activity, join the team,” he said. “This really is another way for our students to stay connected to the school and build positive relationships with staff and other students. It also provides students with an opportunity to be successful, shine, and showcase their skills in a different way.”

The U.S. Army and Ohio Army National Guard are among the partners and sponsors of eSports, Sick said, in part because of the teamwork and leadership skills taught by the games.

“The biggest overarching it’s going to teach is teamwork, working with others, because a lot of real world is working with others and working with maybe people you don’t like, or maybe in a different way,” Sick said. “It teaches problem-solving skills that I think is the biggest real-life skill that any teacher can teach a kid is how to solve a problem, and we just happen to be doing it through a video game.”

eSports Ohio has several curriculum and parent resources based around the games.

for the regionals. State finals will be contested remotely. Sick said matches may be streamed so people can follow online.

“This is one of those universal things. It doesn’t matter if you’re in one clique or the other, everyone plays a certain game. It’s really cool,” Williams said.

Clermont Northeastern Local School District ranks among the top 20% of public school district in Ohio for:

Clermont Northeastern Local School District, which is ranked within the bottom 50% of all 914 school districts in Ohio (based off of combined math and reading proficiency testing data) for the 2018-2019 school year.
The school district's graduation rate of 90-94% has increased from 85-89% over five school years.

The revenue/student of $13,863 in this school district is less than the state median of $14,177. The school district revenue/student has stayed relatively flat over four school years.
The school district's spending/student of $13,174 is higher than the state median of $13,086. The school district spending/student has stayed relatively flat over four school years.
40% of Teachers Call in Sick in Wisconsin
What happens when nearly half of a state's teachers call in "sick" for school? Learn about the turmoil between legislators and the teachers union in Wisconsin and how the rallies, protests, and fighting will set precedence for other budget-strapped states.
10 Best SAT Prep Methods
The SATs are a make or break exam for high school students. Check out the 10 best ways to prepare for the big test.
Common Mental Health Problems in School Children and How to Address Them
Millions of people struggle with mental health issues on a daily basis, but no one wants to think that these issues might affect children. As a parent, it is your responsibility to know what your child needs and to provide it. This includes identifying problem behaviors and seeking treatment when your child needs help.
Sours: https://www.publicschoolreview.com/ohio/clermont-northeastern-local-school-district/3904632-school-district