I'm still fairly new to the whole Craigslist thing but the more I spend on it, the more fascinated I grow with the site. Honestly, all I've ever heard were the horror stories about the site with the scams and such. But, I guess that stuff can happen anywhere. So, I decided go dig deeper into what was on Craigslist in the Abilene area and boy did I find some interesting items.

Actually, I kind of feel like those guys from that TV show 'American Pickers' when I get on Craigslist because you just never know what you're gonna find.

Check out the 5 strangest and coolest things I found on Abilene Craigslist this week.

New York Herald newspaper dated April 15th, 1865 with the headline about the assassination of President Linclon.

Not the most unique things I found on Abilene Craigslist, but, by far the coolest. Why? Because one of those key chains is a very old KEYJ key chain (upper left). That's awesome.

Who needs a tattoo shop when you have your own tattoo machine? I kid, I kid. I would never suggest getting ink outside of a sterile and professional setting. This is a set of 10 tattoo machines that run $30 each. I've been around tattoo shops enough to know you could probably find the right person to sell these to and make a nice little profit. Regardless, this is something I didn't expect to see on Craigslist.

Now I'm not sure what the law says about having a horse in the city limits, but I am sure it would be much cooler than one of those little yelping ankle biters that pee anytime they get excited.

I don't know a ton about original or reproduced phonographs but I do know they look really freakin' cool. That, and there's no better sound than listening to your favorite band on vinyl.

There you have it my friends, the 5 strangest and coolest things I found on Abilene Craigslists today. I'll try and keep you all posted on other unique finds from the world of Craigslist.

There are a large amount of people who will agree with me when I say I suck at self-promotion.Not that I don’t talk to enough people, or that I don’t pass out enough of my cards (which, by the way, don’t even say I’m a tattoo artist either). I mean I honestly don’t tell anyone. I can bet money there will even be people who read this and say “Wait…Cara tattoos?” It’s terrible for business, actually. The promotion and concern for my clientele comes from...my clientele. They’re my walking canvases, and refer anyone who comments on their tattoos to me. Even though this isn’t the most effective means of networking, I prefer it much more than the disreputable advertising that's going on on Craigslist.

I get it. We’re in economic hardships, and we all feel we have to retreat back to the Renaissance way of living- to exhaust yourself with as many different skills as you can fit onto your paper plates in the hopes that they will help you live a financially stable life. In some ways, we absolutely should be more Renaissance in the way we live right now. Learn a new skill, sure.Find something rewarding in your spare time that might make you a little extra cash. But in no way, shape or form does this mean you should pick up a tattoo machine and go to town on the first person to give you 25 dollars.

Because this is what happens: 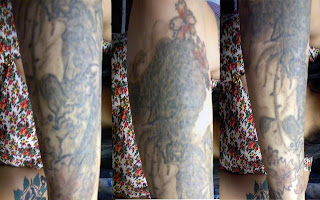 It almost feels like your eyes are playing tricks on you, but that's as clear as it gets. And yet- it makes no sense. This girl went to get a lighter tattoo underneath it covered up, and found a tattoo artist on Craigslist that charged her $40 an hour for....this. She knew immediately that he was messing up, and he threw her empty promises that the blotch of ink would "fade and look better". Last time I checked, when a tattoo fades it doesn't necessarily look "better". It looks, well, faded. Also, koi fish don't usually have a giant tumor attached to the left side of their lip. Just saying.

So yes, she absolutely admits to wanting to get a cheap tattoo, like so many people do. Do you want to know how much she actually spent on this affordable tattoo?

120 for the three hours this guy in Anaheim spent butchering her arm, and $3,000 more for the laser surgery treatments that left her arm scarred and felt a lot like what I think Freddy Krueger's face would feel like. She spent 3 years in long sleeves, hiding it and considering amputation (that's not a fact, sorry. But wouldn't you?).

I found her on Craigslist (surprise!) looking for another tattoo artist (I said the same thing) to cover up this one. I pulled her off of there and got the entire story, and here we are. I spent 6 and a half hours on her today, working on two different cover ups that she had botched. It was a semi-emotional parting, but I sent her off with a scolding for using Craigslist, and one session done: 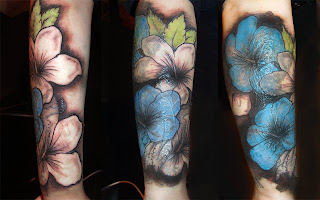 I wonder if the people who post on Craigslist understand the consequence of turning on that homemade tattoo gun and pressing it into someone’s skin. “Good tattoos aren’t cheap and cheap tattoos aren’t good”. God, I can’t even begin to explain how perfect this saying sums everything up that I’m trying to say. If you honestly want to be a good tattoo artist, you have to put so much time, effort and money into it. Actually, you put time, effort and money into every tattoo you do. From sterilizing to cleaning, down to needles and inks and machine parts. It’s costly keeping your work clean. I’m not sorry that tattoos are expensive.

If you really have a problem with the price of getting a tattoo, I have two options for you: A) don’t get one or B) pop on over to Craigslist and check out which one of your neighbors rigged himself a tattoo machine and have him mark your body on his kitchen table.

See you in hell. xo

What would I do with $1,000? Well, if I had a 'Grand in My Hand' I would do the most logical thing. I would go to Rockford's Craigslist and buy a bunch of awesome stuff I don't need.

The first item I would obviously buy would be a tanning bed. This gem is priced at $600. I know, it's a big chunk of change but I could use a little color. I'm like Casper-the-German-Polish ghost running around here. You can literally see through my skin.

Second on my list would be this beautiful turntable for bonzi plants. It's only $50 which I think is an exceptional value. It even comes with all of the tools for trimming your bonzi plant. One problem, I don't have a Bonzi Plant. But hey, I'm a sucker for a good deal.

My next item of choice is this AWESOME sticker and temporary tattoo machine. With the price tag of $250 it fits nicely in my budget. Plus, I look at this as an investment. All of my nieces and nephews could pay me a dollar every time they want a sticker or tattoo. BINGO! I'm in the money.

Well, I do only have $100 left so I will settle on this fancy Nascar Jacket. It is a 2X (so way to big for me) but it does look like it would be very warm. I could wear it when driving so I would look extra fast. Not to mention it will keep me nice and toasty around the bonfires this summer.

What would you buy yourself if you had a "Grand In Your Hand?" We are giving away $1,000 twice every weekday in May. I hope you are one of our lucky winners!

Sours: https://967theeagle.net/4-outrageous-rockford-craigslist-items-to-buy-with-1000/
How to make a tattoo machine out of motorcycle handbrake w/ dc motor(p1)

We will make sure the time flies by. If you have used Doublelist or Backpage personals at least once in your life youll feel right at home using DoULike personals in Athens. Georgia choose the site nearest you. As the name implies this is a Craigslist personals alternative from the creators of one of the best dating websites. Ad 3 flights a day. It is quite the case with sites like Craigslist and Backpage personals. Singer Sewing Machine Heavy Duty 4452 New in Unopened Box. Pic hide this posting restore restore this posting. Enjoy comfort and personal care on your journey. Start using our website all you need to do is create an.