What Wavelengths and Colors do

To understand how your crops are going to react on different wavelengths and colors, you have to keep in mind that every crop and every growth stage requires an individual approach. 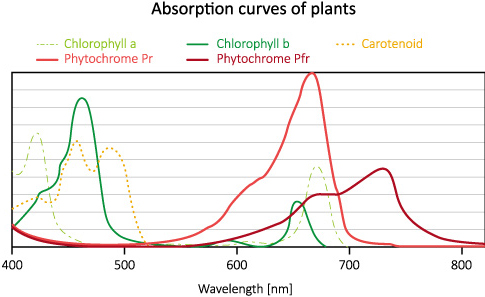 The amount of light affects the photosynthesis process in the plant.

This process is a photochemical reaction within the chloroplasts of the plant cells in which CO₂ is converted into carbohydrate under the influence of the light energy.

The spectral composition of the different wavelength regions (blue, green, yellow, red, far red or invisible e.g. UV or IR) is important for the grows, shape, development and flowering (photomorphogenesis) of the plant.

For the photosynthesis, the blue and red regions are most important.

The timing / light duration which is also called photoperiod is mainly affecting the flowering of the plants. The flowering time can be influenced by controlling the photoperiod.

Photosynthetic efficiency is mainly driven by chlorophyll a and b.

The phytomorphogenic effects are controlled by applying a spectrum with a certain mix of 660nm and 730nm in order to stimulate the Pr and Pfr phytochromes.

The visible spectrum is a very small portion of the electromagnetic spectrum that can be seen by the human eye. This is summarized in the figure below, which is not to scale. The exact boundaries of each type of wave are not precisely defined and often different authors have slightly different values. This is not really relevant since this classification is just indicative.

The electromagnetic spectrum (not to scale).

As frequency increases the wavelength becomes smaller and the energy associated to each photon increases. Visible light, infrared and radiation with longer wavelengths are non-ionizing radiations. UV light, X rays, gamma rays and radiations with shorter wavelength are ionizing radiations, meaning that each photon carries enough energy to ionize matter. When a ionizing photon with enough energy impinges on an atom or on a molecule, it can knock off one electron from it. Having lost an electron, the atom (or molecule) becomes electrically charged and is called an ion. Because of their electrical charge, ions are chemically very active and tend to react with nearby molecules. The limit between ionizing and non-ionizing radiations is located somewhere in the UV region, but it's not clearly defined and somehow fuzzy. A photon energy1 of 10 eV (corresponding to a wavelength of 124 nm) is often considered the threshold between ionizing and non-ionizing radiation, but there is no consensus on this topic.

The wavelengths2 of the visible spectrum are usually between 400 nm and 700 nm. The energy carried by each visible photon is between 3.1 eV and 1.8 eV respectively and the frequency is in the 750 THz to 428 THz range

The sensitivity of the eye to wavelengths beyond this range drops dramatically and they are represented as black in the figure below. The maximum sensitivity is usually between 500 and 550 nm.

The perceived color dependens on the wavelength and the table below will give a rough idea. Of course, this varies from one person to another.

You may be surprised that the color called violet actually looks blue and that there is no purple nor pink: this is because in the 17th century when Newton discovered the spectrum of the sunlight, the names of the colors corresponded to slightly different hues. He called violet what we would call blue today and blue what we would call cyan. You may also think at the famous poem "roses are red and violets are blue", the hue of the violets is actually blue...

Purple and pink, on the other hand, are colors that do not correspond to an unique wavelength, they are perceived by eye when both blue and red light are superposed. Since blue and red are at opposite sides of the visible spectrum, no single wavelength will appear purple or pink.

Talking about missing colors, there is no brown nor grey light neither: these colors are just perceived when compared with other brighter colors, gray is a dim white and brown is a dim yellow/orange.

Wavelengths shorter than 390 nm are part of the UV spectrum and are not visible; UV meaning ultra violet, beyond violet (meaning blue). Wavelengths longer than 750 nm are part of the IR spectrum and are not visible neither; IR meaning infrared, below red. It's not possible to give a precise boundary between visible and invisible wavelengths since that's very subjective: some people may still see some light at 720 nm and some others may not.

White light, a superposition of all colors, can be decomposed with a prism to observe its spectrum. Just shining light at a prism is not enough; the light has to go through a narrow slit to let only a small ray pass through. The quality of this slit is very important for the precision of the result. In the example below, the slit is just a crude cut in a piece of cardboard and makes a very rough spectrometer, but still enough to observe a "rainbow". 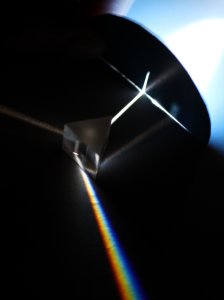 Visible spectrum of white light observed with a prism.

Each wavelength in nanometers is displayed in its approximate color

As a natural, non-invasive method there are a wide variety of applications being studied.

Most of the studies and interest is around the use to treat skin conditions, but there are a whole host of further applications.
The beauty of this type of treatment is that there are no significant side effects doucmented, yet a long and well studied list of applications.

How it works
The Wavelengths of Red Light Therapy
What does it do in the cell?
Who does it benefit?
Can it be used for beauty?
What is the standard treatment like?
How often can it be used?
Risks?
Which light source is best?

Red light interacts with the body in a similar way to infrared light – This it thought to involve a few mechanisms including by increasing energy (ATP) generation on the cellular level.

The key difference between red and infrared is that red wavelengths of light are absorbed and used in the first 25mm of skin tissue, whereas infrared light can penetrate much deeper into the body.

This same mechanism is also responsible for many of the benefits of sunlight, which contains the red wavelengths as part of its spectrum. Sunlight however, comes bundled with potentially harmful UV (and potentially beneficial) & blue light, making red light therapy different in various respects.

Most red light devices on the market are weak and will only penetrate 2 – 3mm of skin tissue. Stronger devices such as 100mW/cm²+ LED light devices can reach through the entire skin layer, healing from the bottom up.

The Wavelengths of Red Light Therapy

Red light therapy uses any wavelength between 610 nm and 700 nm.

The most common wavelengths you will see are 630 nm (orange-red) and 660 nm (deep red) which roughly coincide with the absorption peaks of cytochrome c oxidase (the target of light therapy), plus they are cheaply available and efficient. While effective, these are not necessarily the perfectly optimal wavelengths.

The absolute optimal single wavelengths are 620nm and 670nm.

These optimal wavelengths vary to some degree in different studies and different cells. 615nm and 680nm are also sometimes optimal.

What specifically does it do in the cell?

It is thought by researchers that there are a variety of cellular structures that absorb light energy, most notably the mitochondria:

Who can use it?

Red light therapy is entirely safe and non-invasive, meaning it can be used by anyone – young or old.

The current hyptohesis (on the mechanism of action) points to a foundational level of the body, meaning a potentially wide array of useful applications.

The light is simply used for a short amount of time (5 – 15 minutes), after which further therapy would show quickly diminishing returns.

This is known as a biphasic dose response – lower doses give a good effect, very high doses cancel out this effect. The reason why longer session times gives diminshing returns is not very well understood, possibly involving heating of the skin cells, ROS or nitric oxide release.

Regardless, a short therapy session gives better results than constant use for hours on end.

How often can it be used?

The red light would ideally be used 3-4 days per week to start off with and continue like that for 4-6 weeks.

For general maintenance and health once or twice a week is acceptable.

Are there any risks from red light therapy?

There are many interesting applications for red light therapy, but what about the risks? 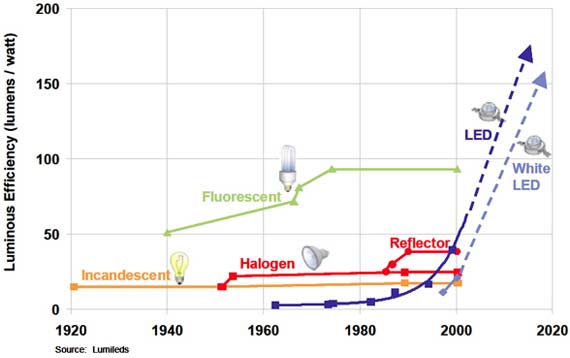 The reasons why red LED devices stand out from the rest include:

Medical & Healthcare Disclaimer
The information contained in this article is not intended or implicitly suggested to be an alternative for professional diagnoses, or profesionally recommended treatments & medical advice. Absolutely all of the content, including the article text itself, images, comments and other information, contained on this web page is for non-specific information purposes only. We strongly suggest that one should never ignore professional health/medical advice and we strongly suggest that one must not delay seeking a professionally recommended medical treatment because of information attained via reading this article/website. The products sold or recommended on this web site are absolutely not for the diagnosis, prevention, monitoring, treatment or alleviation of any specific disease, injury or disability.

damage LEDs. It is

recommended to use a

handling the  LEDs. All

machinery must be ele-

Pse vs hoyt vs mathews