The 1996 WR250 was ADB’s least favourite enduro bike but Yamaha turned things around with this 1998 model and was back in our good books.

In 1996 the Yamaha WR250Z went through ADR compliance and, in an effort to make it more accessible, the two-stroke engine was tamed and the suspension tuned for the average competitor.

Long considered one of the head kickers in its class, the WR250Z now had smoother power but the suspension was way off. It had gone from rock hard but good through the entire range to confused, with a soft and spikey front-end and a rear that kicked like a mule with colic.

The changes made for 1998 were all in the right direction. They began with the ’97 model being upgraded to match the specs of the YZ but with an 18” rear wheel instead of the motocrosser’s 19-incher, a wide-ratio ’box, sidestand and lighting coil along with enduro spec suspension. These upgrades carried through to the WR250Z you are looking at here, along with some others. 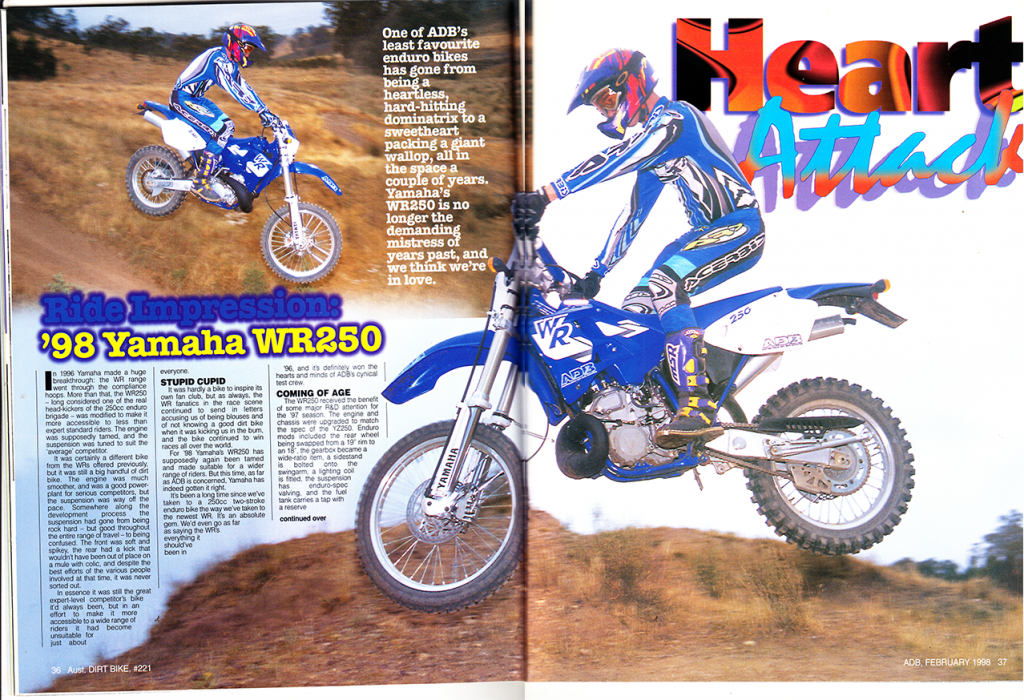 For 1998 the combustion chamber volume was decreased from 23.3cc to 22.9cc with a drop in compression ratio from 9.2:1 to 8.7:1 and port timing had been delayed by .5mm. The exhaust power valve was reshaped and the governor got a new spring rate, resin parts in the water pump were changed to aluminium with an improved water/oil seal and ballbearing for increased durability. CDI timing was revised, and caster and trail went from 27.7 degrees and 122mm to 26.9 degrees and 115mm. Definitely a lot of major changes.

Previous WRs delivered the power “like a knockout punch from Mike Tyson” but this engine was described as a real sweetheart. The new WR250Z was willing to trials ride through sharp loose rocks, but would hurl its strong mid-range behind too tall a gear on a hill or out of a corner.
The jetting was a little rich down low, loading up a little out of corners, but improved with the needle clip set on the highest position. Stock was second highest so it was thought a little fine tuning with the pilot jet was required to get the needle in the middle. This test bike had had the restrictors in the header pipe and the throttle limiter removed. 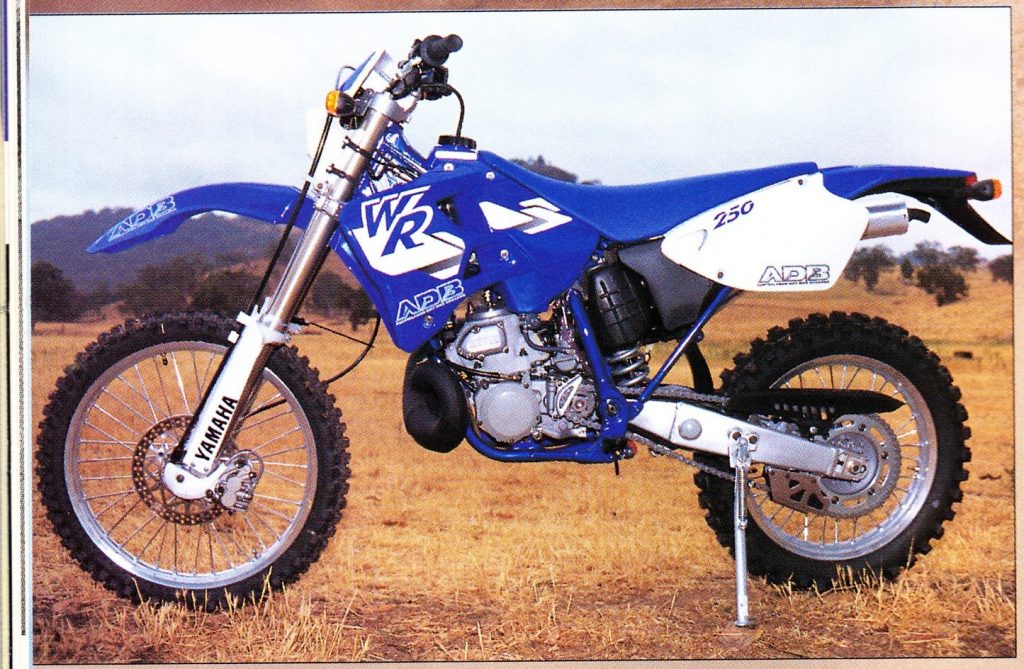 The suspension was firm but progressive, with the shock a little softer than the fork, which was “beautifully forgiving on hard-edged steps and rocks”. All the clickers were set at the 12 out position and that suited all the test riders, from clubmen to experts, with nobody doing the normal fiddling. It was found to be equally good in the bush and on the MX tracks at the test venue, Louee Enduro and MX Park.

Everyone was happy with the brakes, with the new larger-diameter rear disc receiving praise. Both brakes offered good feel on loose, snotty downhills. The only negative mentioned in the test was the early failure of some of the ADR gear, which most owners would remove anyway. The rear guard extender hit the tyre at full compression, the speedo only lasted 23.9km before failing and the rear blinkers shook the lenses loose in the first half hour, with the right one beating itself to death against the muffler.

In Yamaha’s defence, this was a “pre-production” ADR effort and the company assured ADB that full-production models would have those issues addressed. The WR250Z sported a five-speed gearbox with USD fork up front and a single shock out the back.
Heritage Editor Warren Jack 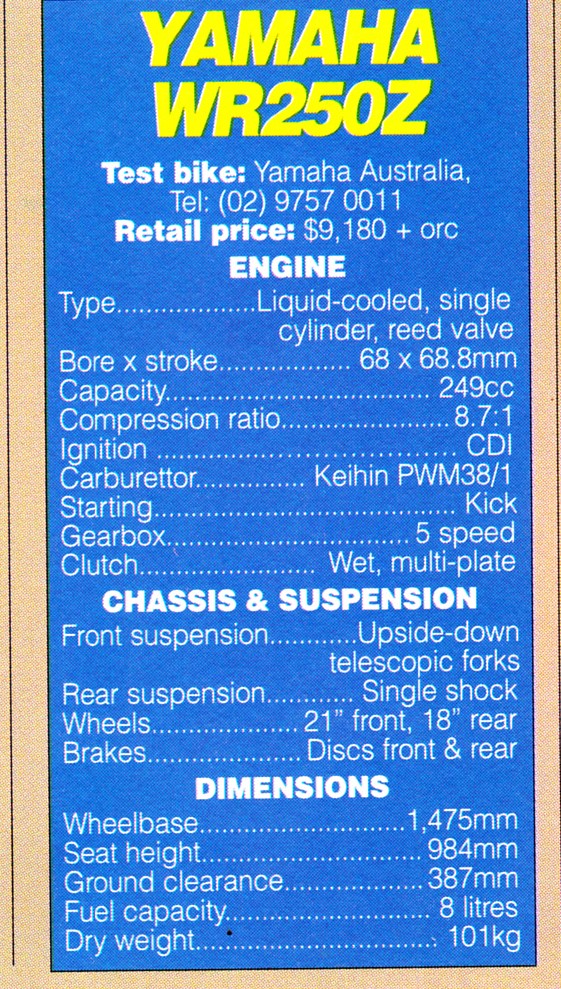 FROM TRAILS TO MOTOCROSS, YAMAHA WR250 DOES FINE

There are a couple of ways to get a motocross bike set up for enduros, desert or trail riding.

One way is to head down to the local dealer and write him a check for more than $5,000 for a new motocrosser, then take the bike home and take off all the parts that won't work well on the trails.

The next step is to get out the checkbook again and order after-market parts to replace all the pieces you have just removed. A bigger fuel tank, different gearing, a heavier flywheel to smooth out the MX powerband . . .

The second way is to buy a Yamaha WR250.

The WR is based on Yamaha's 1994 YZ250, which many people chose as the best motocross bike of that year.

Yamaha has added a larger (3.4 gallon) fuel tank, put in a wide-ratio gearbox and added a heavier flywheel. Yamaha also included a lighting coil for riders who wish to add lights.

There is also a front disc brake guard and a quick-change, 18-inch rear wheel (the YZ comes with a 19-incher these days).

The 1994 YZ250 was a stable, bulky-feeling bike with a smooth and deceptively fast engine. The WR is just as stable and even more bulky-feeling because of the bigger fuel tank. The bike is as fast as the YZ, but the power is easier to control at lower speeds when picking a line through tight trails.

The fuel tank is a sore point with many riders. It makes it difficult to move forward on the bike in corners, and it requires some adjustments in riding style.

I tested the WR at the same time as a 1996 KX250, and the WR felt like an ocean liner compared with the slim, hard-hitting KX. However, the WR could turn comparable lap times on a motocross course, even though it felt much slower.

In fact, for the casual motocross racer the WR would do just fine in an occasional race. And it's much more versatile than a motocross bike. With this one machine, a rider could comfortably go trail riding anywhere from tight, woodsy trails to the wide-open desert, as well as compete in enduros and cross-country races.

One of the reasons the WR works so well in a variety of riding environments is the versatility of its suspension parts. Unlike many trail bikes, they are not set baby-soft from the factory. Both the front and rear units can withstand high-speed riding without eliciting a whimper from the bike or rider.

Riders who spend a lot of time on tight, rocky trails may want to soften things up a bit, but otherwise Yamaha has done an excellent job of making the suspension effective and hassle-free.

The engine also is comfortable in a variety of roles. Though the power is linear throughout the rpm range and is manageable at low rpms, there's still a potent top end for race situations. Again, riders who spend a lot of time on tight trails may find the powerband too potent to be effective, but everyone else will be happy.

94 to 97 wr's are based on the93/ 94 yz ,95yz's powervalve is trying to do more from the basic design and the 96 yz changed its frame and plastic. How it affected the bike or all of the details changing from these prevalent changes I am not sure. The only diferrence between the 94 wr and yz is wide ratio transmission, lighting coil, different tank and seat , an oring chain,rear wheel size,suspension settings, and probably a spark arrestor but not sure. As the yz's evolved the wr didnt except for maybe the Keihin carb and suspension settings. According to some people the 94-97 wr power would be a better motocrosser than a 96 yz and the 96 yz is an easier trail rider than the wr because of the way the yz cylinders and exhaust valves changed. You can easily bolt on the cylinder of any of these bikes as the engine cases and pistons are the same. But would be very expensive to match all parts , reed valve, head,exhaust valves,pipe and possibly ignition timing<cdi>to have parts that are designed to work with each other properly for decent power. Yet it is relatively cheap to modify<port ,head and powervalve mods> to have them feel all the same.

interesting note is that the wr stator with a lighting coil is actually cheaper than a yz stator with no lighting coil. As with some of the different parts that are actually interchangeable with no performance loss or modification.<my parts guy loved me with all these questions when i was bugging him :eek: >

I am in no way an expert but I have done a little bit of research by my reading of Eric Gorr's performance handbook,studying parts microfiches, bugging my yamaha dealer, and the rare occurance of me actually buying a part that is not an actual 94 yz part becasue one of the other years/ models was cheaper