I've been using a couple of GreasyFork scripts with Tampermonkey Firefox extension for a while. Only recently has a missing feature on a web page bothered me enough to consider creating a user script myself.

The community-maintained documentation is rather brief and not updated too often. But since user scripts are mostly just additional JavaScript running in the context of the web page, there isn't much to learn that's specific to user scripts. The most important part is the script header with meta keys describing the script and specifying when it's going to be activated:

In my case, most of the code was inspecting the DOM using the and methods:

I used unobtrusive JavaScript principles to add interaction to the page, i.e. I handle events using the method:

A basic development environment is provided by the Tampermonkey extension. You can open it via the Add a new script... menu command: 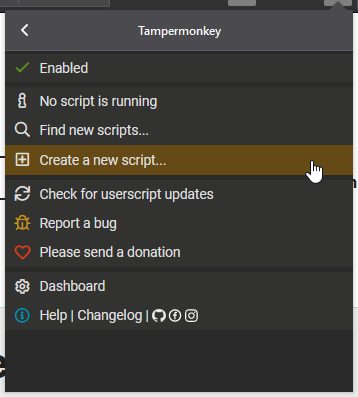 When you save the script for the first time, it appears in its Installed userscripts list. You can open it in the built-in editor from there to modify it at a later time:

Although the editor is decent, I prefer Visual Studio Code for writing JavaScript. Even without TypeScript types, it can provide great code completion and help for methods used. This makes writing code a lot easier. And it even helped me notice a couple of mistakes in my code without running it.

Admittedly, this approach adds some overhead to testing the script. Instead of simply saving it, I have to copy and paste it to the Tampermonkey editor and save it there. I found a Stackoverflow answer with instructions for loading the script in Tampermonkey directly from the file system but I couldn't get it to work. Despite that, for me the benefits of using Visual Studio Code overweigh the inconvenience of having to copy the script to test it.

Publishing a script on GreasyFork is just a matter of filling out a simple form. If you host your script on GitHub (or another Git host), the process is even simpler as you can import it from there. To automate updates, you can even set up a web hook.

You can check the script I've written in my GitHub repository. Of course, the code is very specific to the problem I was solving. Still, the general approach will be useful in other scenarios as well.

The key takeaway is that it isn't difficult to write a user script if you have some basic knowledge of writing JavaScript for the browser. It's much simpler to do than writing a standalone browser extension.

If you're looking for online one-on-one mentorship on a related topic, you can find me on Codementor.

If you need a team of experienced software engineers to help you with a project, contact us at Razum.

For use of userscripts on Wikipedia, see Wikipedia:User scripts.

A userscript (or user script) is a program, usually written in JavaScript, for modifying web pages[1] to augment browsing. Uses include adding shortcut buttons and keyboard shortcuts, controlling playback speeds, adding features to sites, and enhancing the browsing history.[2]

On Wikipedia, a user scripts feature is enabled for registered users that allows them to install userscripts to augment editing and viewing of the encyclopedia's pages.[4]

One aspect of userscripts is that they can be shared. They can be uploaded to a userscript repository where they become available to other users for downloading.

Historically (circa 2005–2011) userscripts.org, created by American programmer Jesse Andrews, was the largest such repository for userscripts. Over time, the site was transitioned between various maintainers before it went offline completely in May 2014.[5] All that remains is a mirror, which is useful for archival purposes.[6][non-primary source needed]

Users of the Greasemonkey[10] and Tampermonkey[11] extensions may choose to install .user.js scripts from any location.

Sours: https://en.wikipedia.org/wiki/Userscript
Name Author URL Description DH3 Chat Overhaul ShtosgreasyforkAdds a ton of features to the game chat, including friend and ignore lists, side chat, emojis, dark mode, chat commands, and more. Functional Market ShtosgreasyforkVastly improves the market experience. DH3 Fixed Kape142greasyforkAn extension for Diamond Hunt 3, meant to improve the user experience. It includes an activity log, various fixes, additional shortcuts, customizable notifications, and some useful tools. DH3 Audio Alerts AnwinitygreasyforkTrigger audible alerts based on DH3 variables. DH3 FP Notification AnwinitygreasyforkAdds a notification which shows you how many times you can fight at a given Combat Area with your current Fight Points as well as a timer for when that number will increment. DH3 Super Duper Preset Switcher AnwinitygreasyforkLet's you switch between your preset-sets in combat and select any of your 25 presets with a click. You can also use the 6-0 keys to switch the preset-sets. DH3 Var Viewer AnwinitygreasyforkEasily view and filter in-game variables. DH3 Slap Chop AnwinitygreasyforkAllows you to cook/eat a stack of food by right-clicking. Also allows you to right-click fish bones to send the maximum number to the bonemeal bin (without wasting any). DH3 Tools One-Click AnwinitygreasyforkAdds a link on the top of the page which sends your character data to https://anwinity.com/dh3/ so that you don't have to enter it manually. Heat & Fish Bar ShtosgreasyforkAdds a heat requirement indicator and energy info to the fishing tab. DH3 HUD AnwinitygreasyforkAllows you to create a custom HUD full of whatever information you want, which updates in real time based on variables received from the server. Note: This script requires you to be able to either copy/paste HUD scripts or write your own using a simple syntax. The default HUD script is just an example and not intended to be super useful. HitChance In Combat ShtosgreasyforkDisplays both your hero's and the monster'shit chance while in combat. Notification Timers ShtosgreasyforkChanges percentages and kilometers to timestamps in notifications. DH3 Oil Fix ShtosgreasyforkAdds a timer to show when your oil will be empty or full based on oil income. DH3 Tick Pulse AnwinitygreasyforkPulses each tick in combat to aid in counting various things (e.g. shark bite). DH3 Friend/Ignore List Upsidedownifier AnwinitygreasyforkPuts the add/cancel buttons in friends and ignore list at the top so you don't have to scroll so much. DH3 Helper LevelgithubAn extension script to allow desktop notifications. Continue Leveling Nightcorex greasyforkAllows you to continue leveling past level 100
Sours: https://diamondhunt3.fandom.com/wiki/Scripts
Making a Userscript - Setup and JavaScript Tutorial

Welcome to Greasy Fork, a site for user scripts.

What are user scripts?

User scripts put you in control of your browsing experience. Once installed, they automatically make the sites you visit better by adding features, making them easier to use, or taking out the annoying bits. The user scripts on Greasy Fork were written by other users and posted to share with the world. They're free to install and easy to use.

Browse this site to find a user script you want to try. Here is a sample of the most popular scripts:

Once you've found a user script, click the green install button on the user script's page, and your user script manager will ask you to confirm the install.

Step 3: use the user script

When you shop on Amazon Smile instead of the main site, a portion of your eligible purchase price goes to your favorite nonprofit charity. This script ensures that you always go to smile.amazon.com each time you shop on Amazon.

Get the Amazon Smile Redirect Script

Many websites either recommend or force you to disable ad-blocking software such as Adblock Plus. This script overrides that restriction in some cases and allows your ad blocker to function as expected. It's not perfect, but it's better than nothing.

Get the Anti-Adblock Killer Script

Many free downloads are coupled with additional applications, extensions, or settings modifications that you may not want. Some downloads include harmless additions such as a branded browser toolbar or a change to your home page. However, some free downloads may install adware and other less-than-reputable software. This script does a good job of removing these unwanted items on some of the most popular websites.

This configurable script automatically closes YouTube video ads after a time delay that you choose. It also offers an option to mute these advertisements as soon as the ad launches.

Many websites display a warning and require user interaction when you click a link that redirects to another site. This script disables that functionality on many popular domains, including Google, YouTube, Facebook, and Twitter.

Get the Direct Links Out Script

The Feedly Filtering and Sorting script adds some useful features such as advanced keyword matching, auto-load, filtering, and restricting to the popular news-aggregation site.

Get the Feedly Filtering and Sorting Script

Block certain websites or entire domains from appearing in search engine results with this script. The title is a bit misleading, as it supports Bing, DuckDuckGo, Yahoo, and other search engines in addition to Google.

It works best with Chrome or Firefox.

Get the Google Hit Hider by Domain Script

This script adds useful buttons to Google's engine. These buttons include tools to search for PDF documents and search for results from user-specified time intervals, including days, weeks, months, years, and hours.

View and download full-size images and videos from Instagram by pressing a keyboard shortcut with this script.

This script works with all browsers, but the direct-download feature only works with Chrome.

This script converts text URLs and IP addresses into links to the respective destinations. It makes almost any text link a clickable link.

Get the Linkify Plus Plus Script

If you're a fan of the Japanese comic genre, this script displays complete chapters on one page in an easy-to-read long-strip format on many of the web's most popular Manga sites.

Get the Manga Loader Script

This script lets you browse image collections on Pinterest without creating an account on the site. However, it doesn't work as expected on all pages.

Use this script to translate selected text on a web page to the language of your choice with the Alt key and the cursor.

Get the Translate Google Tooltip Script

Programmers find this script useful. It resizes all GitHub repository pages for a better look and feel.

Get the Wide GitHub Script

When you're ready to search for scripts, the following sites are the best starting points. Not every script works across all browsers, so verify the corresponding description and notes before installation.

Thanks for letting us know!