At the end of her driveway, not far from the rocky unpaved roadway that leads to her secluded Campbell County home, the unassembled pieces of her metal roof sit waiting for someone to come along and install them.

Further along, at the top of her driveway, sits her home, where she hopes the increasingly weary shingles on her current roof hold up for one last winter.

Because of the precarious status of her roof, Padberg was chosen by Energy Capital Habitat for Humanity to receive a new one this fall. But since being selected, the repair project has undergone a series of ups and downs, caused by supply shortages and trouble finding reliable and qualified volunteer help.

Brenda Kirk, executive director of Energy Capital Habitat for Humanity, expected the job to be done long ago. In early October, after the initial delay in receiving the parts for the metal roof installation, Kirk put a call out for volunteers. Since then, several attempts to replace Padberg’s roof have fallen through.

Some volunteers flaked. Others were more than happy to help, but did not know how to install a metal roof. Not all volunteers needed expert construction experience, but the project required at least some roofers with the know-how to put on a metal roof, as opposed to the more traditional shingled variety.

Eventually, she found the requisite volunteers and set a date to swap the old roof for the new. But when the roofers who were finally supposed to lead the project no-showed on that cold Saturday morning in November, reality started to settle in.

Padberg and her finicky roof will have to make it one more winter alone in the rural countryside.

“I mean it’s winter,” she said, looking at the pile of roof supplies planted on her lawn. “I can’t leave stuff like this.”

One of the last things Douglas Padberg did was build the house that his wife, Barb, 65, continues to live in today.

He laid out the house with intention, tucked into the backside of a hill at the very end of a winding, unpaved road in Campbell County. The front faces south, straight into the rugged trail that leads to its door. The west side overlooks miles of vast, barren, beautiful terrain, oddly unique to their corner of the state.

On the clearest days, the very tips of the Big Horn Mountains are visible in the distance. The sunsets are immaculate.

“It’s got a personality all its own,” Padberg said. “You can’t compare it to anywhere else on earth, right here, what we’ve got. From the crappy ground that doesn’t grow anything to the animals, and plant life and birds.”

The ground isn’t ideal for growing, but the natural light that washes across the inside of her home is enough for her 100-year-old Christmas cactus, which she inherited from her grandmother and mother. It still blooms each winter, even after all these years.

Once the home-building process was mostly complete in 2013, Douglas and Barb moved into the house, a year before he died.

Most of the work was done by that time and Padberg said she has spent the years since finishing the inside of the home, doing everything from replacing windows, completing tile work and painting.

That became an issue in recent years, as the sudden Wyoming storms and strong winds took a toll on her roof. Hail, snow, heavy gusts — you name it. Shingles would fly off here and there. Other minor problems occurred, but she luckily had friends who could help patch up smaller roof issues as they appeared occasionally.

At one point, a leak formed in her kitchen. The scar from that incident is still visible on her ceiling, but at least the ceiling is still there. Padberg said the hole was filled just in time. Had it gotten worse, she was told parts of the ceiling, attic and roof were in danger of collapsing.

But now some of her friends are getting too old to get up on the roof too. Many are retired oil field guys. They will do what they can, she said, but there are limitations with age.

So that kind of patchwork help is no longer sustainable.

“I’ve been having nightmares over my roof,” she said. “I had no idea how I was going to pay for a new roof.”

After putting her name in for a free roof giveaway this summer, she was not selected. But through that application, her name got passed on to Kirk and Habitat for Humanity, who knew after inspecting Padberg’s home that it was due for a new roof.

Padberg remembers when the roofing company reached out and said, “We’ve been looking at the pictures and you need some help.”

Then Kirk came to the same conclusion.

“Boy howdy! I sure do,” Padberg reiterated.

Kirk told Padberg they would get the house fixed right. That included applying for and receiving a refund to pay for new siding and installing wheelchair ramps to access the home. The Home Depot donated and installed one ramp on the back of her home sometime after Thanksgiving, which knocked one of the to-dos off of her list.

Padberg walks, but her roommate, Les — a 71-year-old Vietnam veteran — is wheelchair bound.

In the summer, he would sit outside and face the wide open view, listening to the animals, watching the sunsets and enjoying the stillness.

But when the first heavy winter storm of the year dropped over a foot of snow on Padberg’s property in October, she said it spooked Les, who felt even more confined without a way to leave the home. He has since moved out, waiting for the wheelchair ramps and other repairs to make it more accessible for him.

Most winters, Padberg spends two to four months without leaving the property, depending on the weather.

Now the question again shifts to when the roof will go up, and who will step up and make it happen.

“Hopefully it won’t be too cold,” Kirk said. “If we don’t have a break in the weather, it’s going to be spring before we get it on.”

In recent years, Padberg has not had problems finding help when needed. Born in Chicago and having spent six years in the Army, Padberg embraced northeastern Wyoming as her home for more than 30 years. In that time, she accrued plenty of friends willing to help out in a pinch.

“That’s Gillette. I love Gillette,” she said. “People are right there. It’s really hard to ask for help. But when you’re in a position like I am, all I have to do is make a couple phone calls and somebody will come out here and help me.”

However, finding help with her new roof has been a different experience.

It isn’t that people don’t want to help. Padberg knows firsthand how willing and giving some in Gillette can be. But the roof job requires a level of expertise that the average handyman doesn’t have. Without help from a professional, Padberg and her roof remain in limbo.

“Look at all the metal roofs around here,” she said. “I’ve got one on my garage … but no one who volunteers to help knows how to do it. And that was a big problem. (Kirk would) get people together, but nobody knew what they were doing. No chiefs.”

Before the calendar moves further into winter, Kirk said she would like to rally volunteers to move the metal roof pieces closer to the house, hopefully in a covered area.

Reviving the Habitat for Humanity program in Gillette has been a challenge. Kirk said the organization is better off than in 2017, when it was effectively defunct, but connecting a network of volunteers and people knowledgeable in construction has been a slow burn.

“It just takes time,” Kirk said. “We have a limited amount of expert volunteers but we’re hoping to build that back up. It’s just going to take time.”

It may take longer than anticipated to complete the projects Energy Capital Habitat for Humanity has undertaken, Kirk said, but that is still an improvement from just a few years ago, when no projects were being completed.

The roof project may be on hold for now, but it is only a matter of time before it finally goes up and the organization moves onto the next one.

Until then, she hopes the old roof makes it one last winter, as the new roof sits on the ground.

Copyright 2022 The Associated Press. All rights reserved. This material may not be published, broadcast, rewritten or redistributed.

Tips For Cleaning Omicron In Offices

Thu Jan 27 , 2022
To little surprise considering the contagious nature of the COVID-19 Omicron variant, the virus had little trouble spreading across the country as holiday gatherings ensued. In the weeks that have since followed, the next hurdle after holiday plans being altered is the safety of office spaces and related facilities as […] 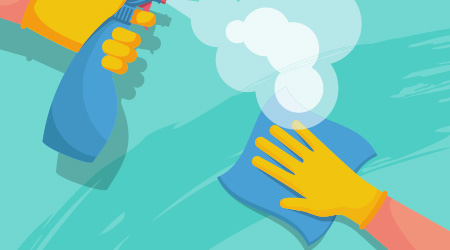